The close cooperation between Lauba – House for People and Art, an independent curator Frankica Mitrović Mihić and the Italian WinArts Gallery has resulted in an exhibition entitled A Synthesis of Traditional and Contemporary Art presenting two young and acclaimed artists: Croatian painter Stjepan Šandrk and Italian sculptor Daniele Fortuna.The exhibition has been realized as a continuation of the sequel of exhibitions in cooperation between galleries with the aim of improving international cooperation among galleries and artists of
our two countries.

At this exhibition Šandrk is presenting the works from his last cycle named Spectacle. Through his paintings the artist wants to show us the way in which we perceive the culture and art in today’s modern society overwhelmed with social media. Daniele Fortuna’s works presented at this exhibition are part of his last cycle called Colormination. They are focused on the human figure interpreted in the light of ancient tradition, but made using a contemporary sculptural morphology.

Interestingly, both artists in their artistic expression remain true to the traditional artistic heritage. Namely, since the last century there has been a rising popularity of new artistic procedures and practices among the artists, such as performances, installations and video art, which has led to the lack of interest in painting and sculpture as traditional media of artistic expression. Nevertheless, Šandrk and Fortuna have managed to revive interest in traditional values and traditional media practices by using them as the basis for their art morphology, but in a quite modern and distinctive way. 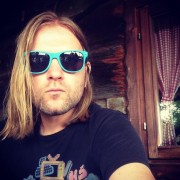